A root canal treatment becomes necessary when the nerve supply to the tooth has become infected via decay or trauma. Your tooth may darken in colour (meaning the nerve has died) yet you may not experience any pain initially.
Once we have identified this, we can start on a root canal treatment, a highly specialised process which may require several visits.

The main aim of the procedure is to remove any signs of infection from the root canal, which is then thoroughly cleaned and filled to prevent further infection.

After these steps are taken – and the process can sometimes be completed in one sitting – your tooth may darken slightly, although we have treatments which can prevent this.

Statistically, root treated teeth are more likely to break due to the process weakening the remaining tooth. To counter this we can provide you with a crown which will reinforce the structure of your tooth and see you leaving our practice with perfectly healthy and aesthetically pleasing pearly whites.

Root canal treatment (dentists refer to this as endodontics) is a dental procedure used to treat infection at the centre of a tooth (the root canal system).

The infection is caused by bacteria that live in the mouth and invade the tooth. This can happen after:

A tooth is made up of two parts. The crown is the top part of the tooth that’s visible in the mouth. The root extends into the bone of the jaw, anchoring the tooth in position.

The root canal system contains the dental pulp and extends from the crown of the tooth to the end of the root. A single tooth can have more than one root canal.

When root canal treatment is needed

Root canal treatment is only required when dental X-rays show that the pulp has been damaged by a bacterial infection. The pulp will begin to die if it’s infected by bacteria, allowing the bacteria to then multiply and spread.

The symptoms of a pulp infection include:

As the infection progresses, these symptoms often disappear as the pulp dies. Your tooth then appears to have healed, but the infection has in fact spread through the root canal system.

Further symptoms eventually occur, such as:

It’s important to see your dentist if you develop toothache. If your tooth is infected, the pulp can’t heal by itself.

Leaving the infected tooth in your mouth may make it worse. There may also be less chance of the root canal treatment working if the infection within your tooth becomes established.

How root canal treatment is performed

To treat the infection in the root canal, the bacteria need to be removed. This can be done by either:

However, removing the tooth isn’t usually recommended as it’s better to keep as many of your natural teeth as possible. 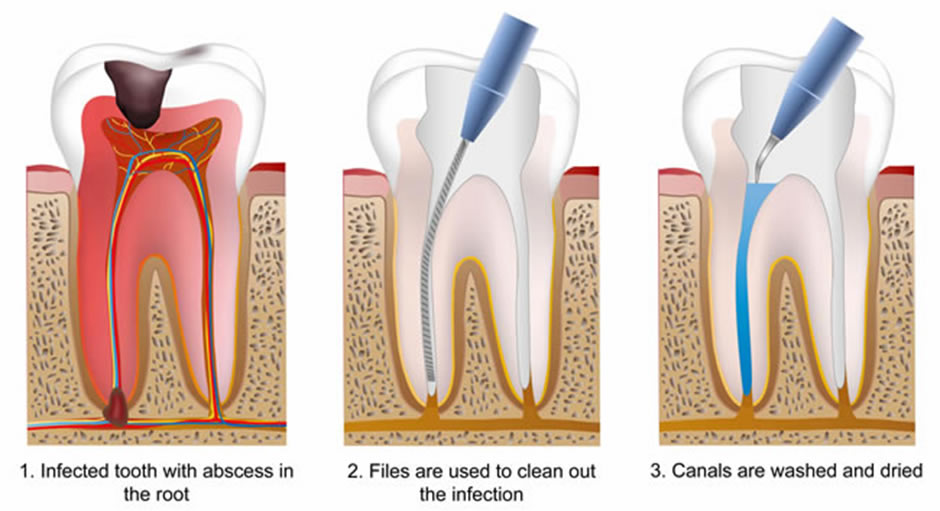 After the bacteria have been removed, the root canal will be filled and the tooth sealed with a filling or crown. In most cases the inflamed tissue near the tooth will heal naturally.

Before having root canal treatment, you’ll usually be given a local anaesthetic. This means the procedure shouldn’t be painful and should be no more unpleasant than having a filling. 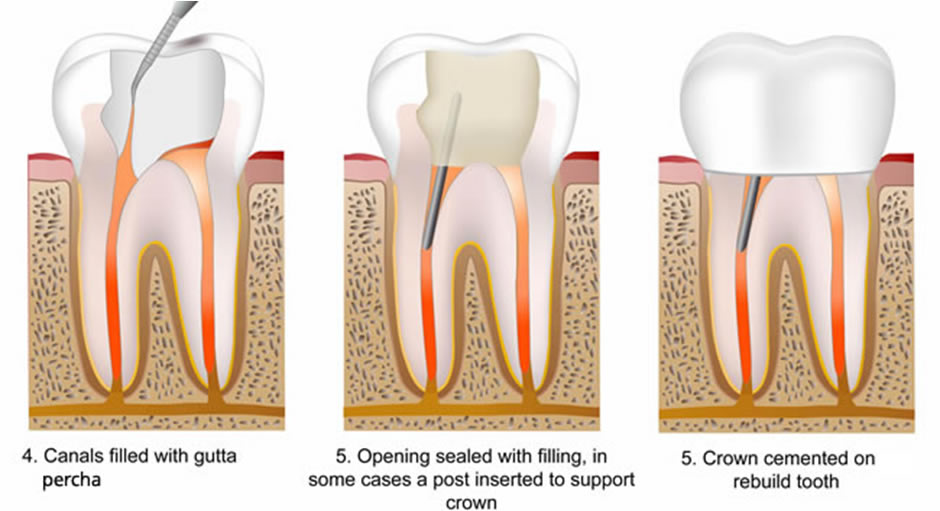 It’s important to look after your teeth when recovering from root canal treatment. You should avoid biting on hard foods until all of your treatment is complete.

After your final treatment, your restored tooth shouldn’t be painful, although it may feel sensitive for a few days.

Over-the-counter painkillers, such as paracetamol or ibuprofen, can be used to relieve any discomfort. Return to your dentist if you continue to experience pain or swelling after using painkillers.

In most cases it’s possible to prevent the need for further root canal treatment by:

“What a great experience I had today with these guys. Due to the awful weather I planned to walk to Port Glasgow from Greenock as my toothache was bad. They then messaged me to say the dentists husband would pick me up. Unbelievable generosity! Was quite anxious as had a bad experience years ago with another dentist and hadn’t been in a long time. Was instantly put at ease by the kind staff. Even gave me a lift home again. Highly, highly recommend Belhaven. Amazing!”

You can find out more about which cookies we are using or switch them off in settings.

This website uses cookies so that we can provide you with the best user experience possible. Cookie information is stored in your browser and performs functions such as recognising you when you return to our website and helping our team to understand which sections of the website you find most interesting and useful.

You can adjust all of your cookie settings by navigating the tabs on the left hand side.

Strictly Necessary Cookie should be enabled at all times so that we can save your preferences for cookie settings.

If you disable this cookie, we will not be able to save your preferences. This means that every time you visit this website you will need to enable or disable cookies again.